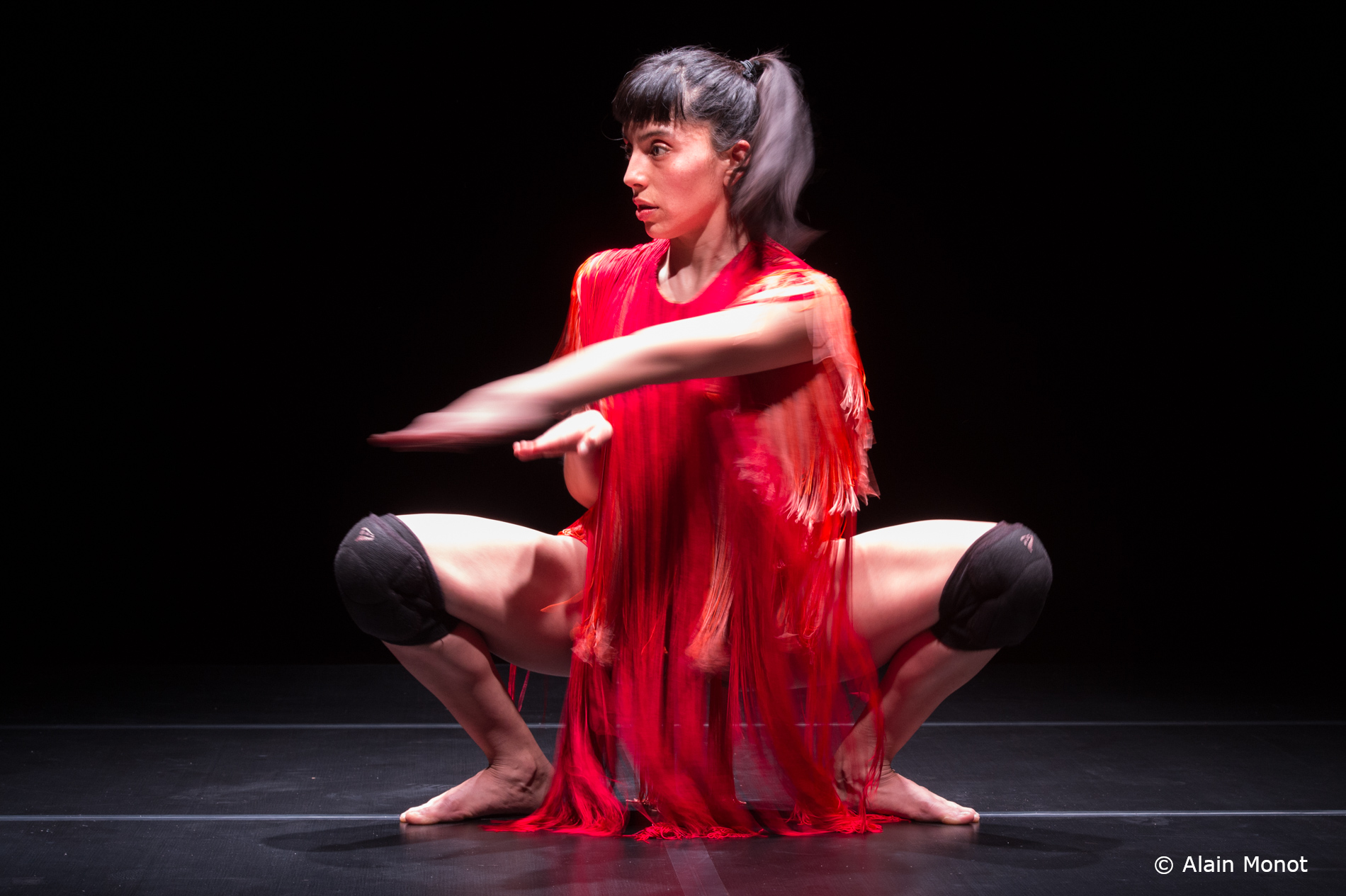 For this solo piece, I began with a position taken from the duo, Epoque – a piece created with Volmir Cordeiro based on dances by 20th century female artists. We were inspired by a Japanese dance someone once described to me, but that I’d never seen. This dance I’d never seen has continued to intrigue me. Starting with this blind spot and lack of information, I intend to dive into this position to develop a dance.

For this dance, I will be squatting. I will be low, I will see things from below.

I will dive into this phantom position, near the ground, to visit the memory of the gestures that compose it. It is an ancient position, one of waiting, of work, a sometimes difficult, uncomfortable position that could be thought to make movement impossible.

By exploring this squatting position, I travel through time, from the pre-Columbian Andes to its most contemporary resurgences in Western culture.

I want this gesture to delve into the different temporal and geographical layers of the body. Through this, my position becomes the territory of a living archive. An active memory.

I am looking for a new space for fiction. I state what I see below and what is happening there. My hair, breasts, sex, and legs will build a dance “from below.” I will not be able to collapse, I will not be able to leap into the air, my knees will be bent, I will walk, I will jump, I will dance.

A mash up, in music, is a  track that’s been created by freely mixing two or more samples, through the appropriation and manipulation of the elements.

MASH partly adopts the same principle in the  choreographic area, in order to create a new relational dimension, both hybrid and dynamic, where neither of the parts is deleted and exchanges, on contrary, are the continuous.

The cabaret of the early 19 hundreds, the first shock rock performances from the ‘60s, TV programs and dance tutorials from the early ‘90s, unsuspected and well ahead of their time, these are references of varied genre and geographical provenance that make up the universe from which we have drawn to realise a common archive, both visual and conceptual, where everything has been mashed.

The key word here is contamination: the focus is not on philological study or on the reproduction of the materials that are put in place but on the dynamic unleashed when the fragments connect to one another and generate something completely new, full of original meaning.

The scene which we inhabit, in constant mutation, becomes the sight of coexistence to which we belong but by which we are also disoriented, that forces us towards an endless process of acclimatisation.

An unbroken dynamics of exchange is the baseline of the performance, a simultaneous translation of one another. The accelerated spinning of this mutual translation separates what has become superfluous from the signs, gestures and expressions that are indelibly inscribed in our physical alphabet.

An inter-form is thus generated, composed of mixture of languages of which both of us are the heralds. These languages need not assert themselves and, on the contrary, by not imposing they create the conditions to accept and translate the other, as the only opportunity for a true encounter. 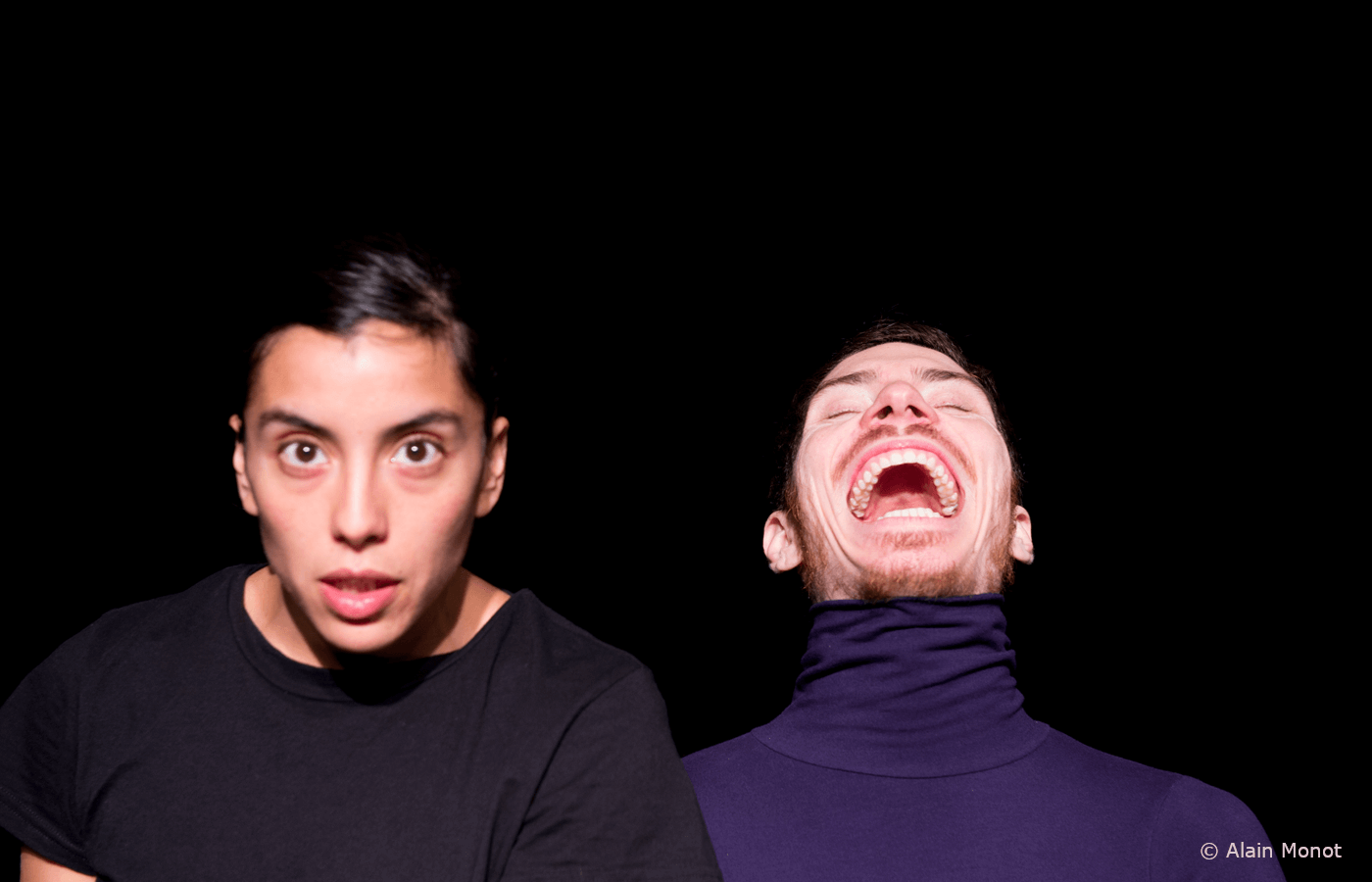 Made up of ecstasy, pleasure, subversion, lasciviousness, terror, extravagance and joy, these dances require a prodigious ability to leap from one mood to another, to engage with the most irreverent stories, and to shake, dislocate and throw the body off balance. Behind every emotion is a range of imagined possibilities allowing us to bring a variety of presences, approaches and interdependent modes of sensation to the stage.

Epoch is a study, an inventory of dances in which 20th century female artists explore the performance of contorted movements. We began by reading the descriptions of the dances written by the artists then transcribed these writings into simple partitions. Thus made fiction, these partitions transform words into movement and enable us to create works that are independent of the sources that inspired them. Once we used the power of words to produce movement, these dances that we had never seen, came to life, telling the story of the desynchronization of two dancers; like dancing the difference between two different eras, between words and sensations, between theatre and nostalgia.

The title, Epoch, evokes a certain quality more than a specific time. In this performance, different elements are explored and interpreted to reanimate an intimate and vibrant story, that has been forgotten or lost in the symbolic past of our journey as dancers. Here dance is used as a raw and direct means to revisit and revivify an archive whose insistent vitality resonates with our present. Epoch is a search for magic. The magic of an enigma, of mystery, of the power of the moment and the way its constant renewal provides the basis for our movement. 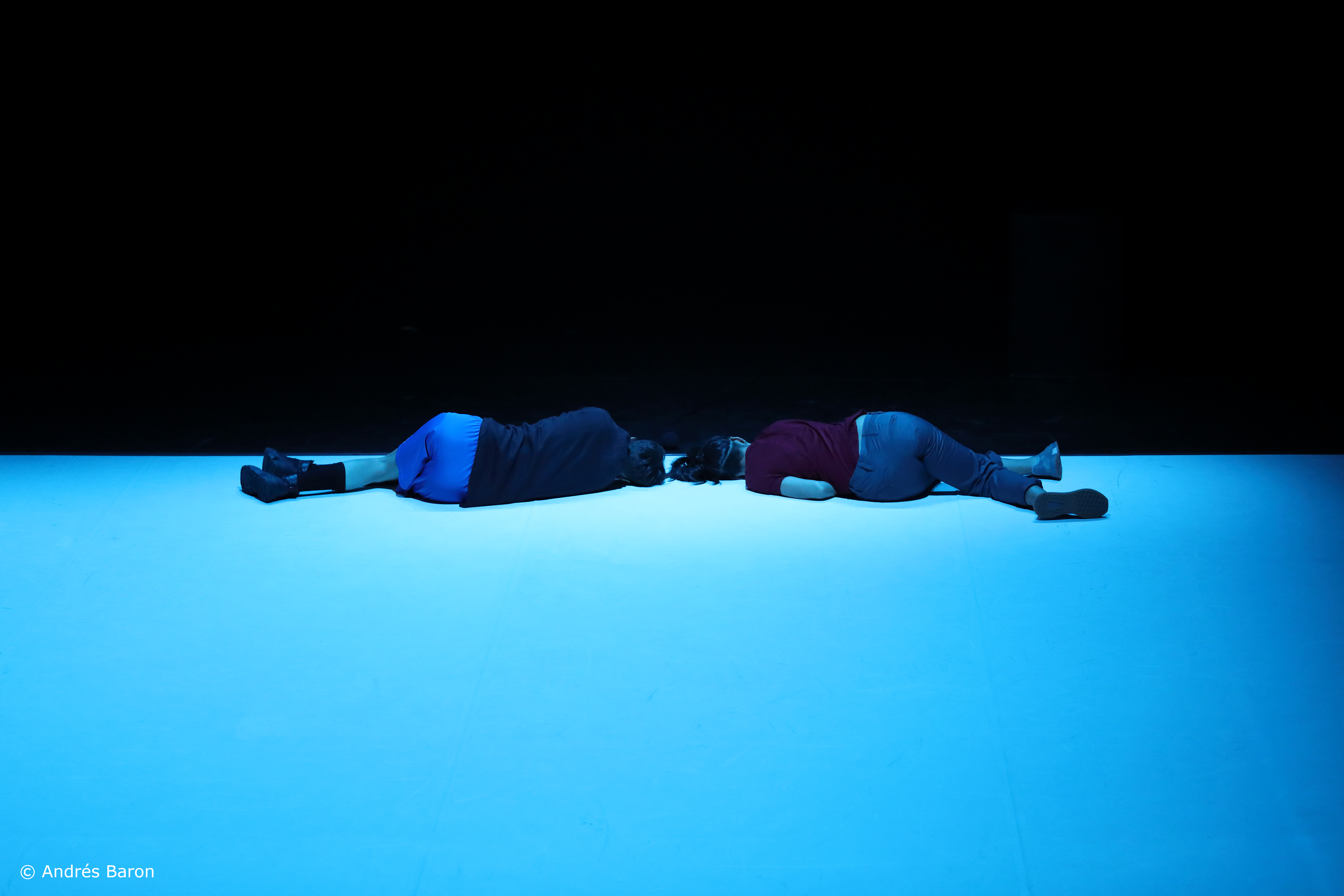 “At the moment of speaking, I would like to have perceived a nameless voice, long preceding me, leaving me merely to enmesh myself in it, taking up its cadence, and to lodge myself, when no one was looking, in its interstices as if it had paused an instant, in suspense, to beckon me.”
Michel Foucault, Orders of Discourse (translation Rupert Swyer)

“I will sing of what I would rather not sing,” says she in the first line of her song. “She” is the 12th century Beatrice, Countess of Dia and trobairitz (female troubadour). But what is this story that she wishes not to tell and of which she nevertheless gives an account?
We started off from this foreboding line to travel much farther beyond, to the deepest forgotten landscapes, to collect the voices of these first women composers. From this wealth of words and melodies, we have created a dialogue between these lyrics that sometimes repeat at distances of kilometers and years. With this as a base to gather a collection of listening postures and dances from various folk traditions, we looked for the archetypes of the listening position in various cultures. Each of these postures of scattered origins became matter that would act as a base for a new score formed of assembling, cutting out, and superimpositions. The big challenge: finding, through dance, the silence of bodies and a place that makes it possible to hear these words.

For us, “I will sing of what I would rather not sing” is like the promise of a future narrative, which each person will be able to invent depending on how it resonates within them. We take this locution from Beatrice’s story so as to concentrate fully on each word. Indeed, this locution contains within it a force like incantation. It’s in between these words that we invite you to fantasize your own fictional story. This initial line, which leaves so much unanswered, will be the starting point for the development of the piece, making us drift among all the other words that it evokes.

In Spanish, the word quieto is used to describe a place, a situation, or a calm event without hustle and bustle—after a big storm for example. It can also be used as an order, as when we say “Quieto!” to make children acting wild be quiet. For this piece, Quieto becomes Quietos in the plural and takes on the sound of a place name: an imaginary place that’s both gentle and mysterious.

The space will be inhabited by two characters engaged in dialogue. They may meet or separate but are always linked together by a common dreamlike landscape. On the bare stage, the two performers will wander around a constantly changing soundscape made up of women speaking, songs, sound effects, and recorded sounds of nature throughout the creation process. On the empty stage, sound will replace the theater set and will lead us from one place to another. It’s sound that will indicate the trail and the signs. Based on work on texture and spatialization, sound will provide the image of this invisible place through which the performers cross.

We’re not looking to say something new, but rather to make what has already been spoken heard. Suppose everything has already been said and we just need to listen. In that case, how can we reorganize the body and invent a dance for listening and display listening not as a passive practice but as an action in and of itself? The power within this action would be equivalent to that of crying out, yet it will have transformed and become the opposite.

The "Concha" or the Conch, is a large shell that can be found on beaches all over the world. Its cavity, emptied of its underwater occupant, becomes a natural sound box. If you put it in your ear, you can "hear the sea", as they say. But on the five continents, the conch is also considered to be one of the oldest musical instruments. It is a member of the wind family, increases the breath and produces a muffled sound, halfway between the human voice and the aquatic vibration. In Argentina, Paraguay and Chile, "concha" is otherwise a slang word for a vagina. The "Concha de tu madre" is therefore an insult or an exclamation of displeasure comparable to our "Whore! ».

The Concha is the common thread of our vast non-exhaustive archaeology of listening through time and space. It allows us to explore both the depths of Western culture and to contradict it. At the same time transmitter and receiver, it forces us above all to consider a third voice, between the passive and the active, curiously carried by the feminine gender. From a pretext object, the "concha" becomes an allegory and a magical symbol of a new world, willingly ecologist, futurist and feminist. It guides our journey, from Rome to Kanaky, from the minaret to our sofa, from Idir to Greuze, from Mondrian to Nikolais, from deep listening to chillwave.